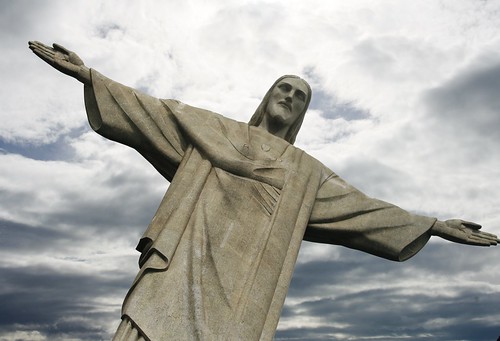 And behold, the veil of the temple was torn in two from top to bottom; and the earth shook and the rocks were split. 52 The tombs were opened, and many bodies of the saints who had fallen asleep were raised;

When Jesus died the world of His creation suffered a dramatic shift. Four things happened immediately that told humanity, this was no ordinary death. This was the defining moment of all human history.

1. The Curtain was Torn in Two – the curtain which separated the presence of God from the people was torn from top (God / heaven) to bottom (man / earth). This showed the new way God had made for all people to know Him and be saved by Him.

2. The Earth Shook – Hebrews 12:27 says that everything that can be shaken will be shaken to reveal to us those things that cannot be. Life as we know it will not continue forever. But life with God, through Jesus, will. It is the eternal over the temporal.

3. The Rocks Split – Jesus said (Matthew 7) that He is like a rock that people can safely and confidently build their lives upon, knowing that when the storms of life come He will remain firm. The earthly rocks might seem secure and trustworthy, but compared to Jesus they too will fail. But Jesus will not.

4. Tombs were opened – The dead were raised into new life because Jesus Himself defeated death. In Jesus the greatest foe to face humanity – the satan and his kingdom of death – has been defeated! When we give our lives to Jesus we align ourselves to the winning side!

PRAYER: Father, I declare that you are worthy of all praise. I commit my way to you and praise and thank you for making a way for me to know you, know life and know victory over my enemy. I love you Lord! Amen